Homo sapiens [Us] evolved in East Africa about 250,000 years ago.  So, if someone asks you where you came from you can accurately say that you came from Africa.

We all came from Africa.  We are migrants.  How many generations of Homo sapiens have there been? A good estimate is 7,500.

The last 500 generations have ceased to be hunter gatherers. We have domestic livestock and grow crops.

Human populations, fuelled by religion and tradition, increase faster in Africa than anywhere.

Africa’s wildlife is confined in smaller and smaller spaces, poached and killed for bushmeat by marauding armies. The Rhinoceros is on the brink. The Cheetah and Wild Dog are endangered.

The Hunter Gatherer Still Existed in 2004. 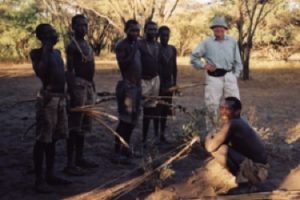 In the picture I stand with the Hadzabe, an indigenous ethnic group in north-central Tanzania. Their numbers were very small.

I read that their water supply has been damaged and that Tuberculosis is introduced to their small villages.

It is thirteen years since I was there; I wonder if they are gone.

Randy from New York wrote on April 13, 2018 at 11:42 pm
Hi, My name is Randy and I was looking at a few different sites online and came across your site bruce-art.ca. I must say - your website is very impressive. I found your website on the first page of the Search Engine. Thanks and Best Regards, Randy

phil chow from Richmond, BC wrote on August 29, 2017 at 8:57 am
Your paintings are so beautiful and make me wish I could visit the places you visited firsthand. 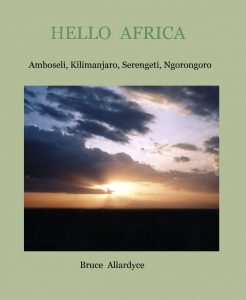